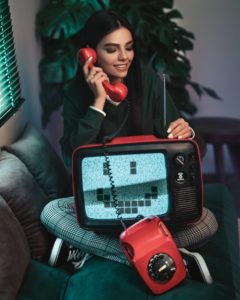 I’m watching this TV show– it’s called the Village. My husband says he cannot handle one more TV show with the basketball season in full force, so I watch by myself. I get my cup of tea. I cover myself with a blanket and here I go. And I absolutely love this show. The story is captivating because you get a glimpse into the lives of several people living in the same building. But what’s amazing is the relationship that they build with one another and how they help each other.

It got me thinking about the concept of a village and the benefits of being part of the village. When I say it like that you might say “well, I don’t want to be a part of any village. I don’t need people to know about my business.” Think of a village as a community. Think of people who are there to support you and pick you up in a time of oye but also celebrate with you in a time of joy.

Eastern Europe Jews used to live in a place called shtetl which is very similar to a village concept, the concept of living next to each other and being together. Imagine the synagogue nearby, the bakery nearby, the school nearby. All their needs were met in the parameters of their surrounding.

In Israel, the concept of Kibbutz is similar to that of a shtetl. People living together Sharing housing, breaking bread together in dining halls, sharing resources so all have the opportunity to live a good life. Have you in your life had a moment where you realized how important your village is to you? What are the instances that you realized that without the village you cannot do certain things?

In Judaism there is the concept of praying together, of being together with a minimum of 10 people. We call it quorum or Minyan. These are the minimum number of people that need to be present in order for some prayers to be said.

This week I had a few instances where I realized the importance of living and belonging to a village. Our community gathered this week as a response to the shooting that happened on the last day of Passover in Poway, California. That made me feel that I am a part of a bigger whole.

That I’m not by myself. I felt that there are people who share my feelings.

The other day I had a meeting with my Toastmasters team as we plan future events and discuss the ways of operating our club. That’s yet another village.

And a third example- a friend of mine called me with not so good health news and seek me out as her village, which I was so happy she did.

A person should not be by themselves with no village- ever. The question is, what are you willing to do to be part of the village? What will you do for the village? And how will you support the village?

Being in the village is an ever-changing dynamics, because a village consists of people. And people change. They come in and out of your life. They move out of your community, and new people come in. But the longer you are in the village, the more you realized that a village is a good thing. Now- go, find and reconnect with your village!