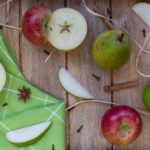 Are you feeling excited about what’s to come? To what’s in store for you? And your family?

The last two weeks in December I had family all around me, so very little “me” time (except going for walks with my dog). And perhaps that’s all I needed. Because to look forward I only have to glance back at the past, not to stare at it. To see what I’ve done that was good and learn from what I’ve done that could be improved on. Did I have regrets last year? Of course! What were they? And do I know how to avoid these regrets in this coming year?

And since I am Dorice, always looking at the Hebrew language, I noticed that the word “to regret” and the word “engrave” share the same root in Hebrew.

And to regret is חרטה

What do you think is the connection between these two words? Could it possibly be that what we regret is engraved upon our souls? And if so, can it serve as a reminder when we are faced with similar situations in the future?

As winter was coming to an end and spring began, the snow began to melt, and the apple tree began to have buds blossoming on its branches. Then summer came and the little buds became beautiful rounded juicy apples, and all through the summer the apples became larger and larger and the branches of the tree formed a canopy. Still, night after night the apple tree was looking up at the sky seeing the stars and thinking they were just hanging on the oak trees all around the little apple tree. And again, the tree pleaded to God, “Oh God, I want more than anything else in the world, I want these stars to hang on my tree. I want these stars to be part of the apple tree.” And God told the apple tree to be patient just a little bit longer, and also reminded the tree all the good gifts that the tree has: the shade, the branches for the birds to rest, the tasty apples. But it seems the apple tree was really focused on having stars. And it kept on begging “God oh God, I want nothing more in the world than to have my own stars.”

Do you feel sometimes like that? Do you see someone else having something and you want that? Do you need outwardly stars to show who you are? What you may not realize, just like the apple tree, that you already have that which you desire.

As God kept on asking and reminding the tree that it has many good qualities, the tree shook his branches from side to side. And as it did, apples fell onto the ground.  When the apple tree looked down, he saw one apple broken to two, right in the middle. And then he saw something magnificent. The tree saw a star hidden inside the core of its apple.

May this be a year in which we will have ample opportunities to engrave a new learning onto our soul, exciting lessons, positive experiences, and may we turn regret into relearning and re-establishing new ways to show up in 2020! Good Vision Year everyone!