Home » Reflections » Turn A Curse Into A Blessing
Reflections 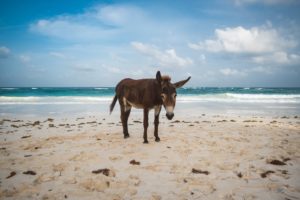 Chuckle loudly if you own an animal…any animal…even a fish in a tank count? Would you sometimes wish your animal talked to you in your language? Told you what’s going on in their lives… If they like their food…what they wish for dinner.  What about if they could tell you if someone came into your home..?

Have you ever been in a situation where a curse turned into blessing? Were you surprised by the blessing you received?  I want to share with you a story that did just that…but first..

So Balak, the king, sends messengers to request that Bilaam come and curse the Israelites. Bilaam invites the messengers to sleep over and says to them “God will tell me what to say,” and God, not surprisingly says “no, you can’t go on this mission.” Bilaam is bummed but what can he do? So…he relates the message to the king’s entourage. They go and tell the king, but the king does not give up and asks Bilaam again by giving him money and gifts. Again, Bilaam says he has to listen and obey what god’s instruction.  To his surprise, god tells him this time to go and say, “only what God tells him to say, you say.”

Who remembers the 60’s show Mister Ed..if you are a baby boomer growing up in America- you know it. I grew up in Israel and this show came to us 10 years later…so I saw it ..so today I have a story about a talking animal to tell you. A true story as stories from the Bible often are…
want to know what animal and what they said? And perhaps more importantly– what we can learn from a talking animal? Here I present you– The talking donkey story!

And I absolutely love this story because there is a prayer that Jews recite every morning that comes out of this talking donkey story from our Torah that is so happened to be read this week in synagogues.

There are three characters that you should be aware of—a king, whose name is balak. A prophet, a real prophet, not Jewish (which becomes really important fact in the story) name bilaam, and a donkey. And of course we have the regular star of the show in biblical times, God himself, who does not need introduction, and he even sends an angel…not the kind with the wings, but the kind with the sword.

Bilaam happily agrees and rises up early in the morning, takes his donkey and off they go. But the problem is that the donkey is able to see what Bilamm is unable, God’s angel attempting to stop Bilaam. Three times Bilaam is beating his donkey as the donkey tries to avoid the angel and his sword until the donkey crouches down. The donkey has had enough! And then, big moment in Bibilcal humor, the donkey opens his mouth and says to Bilaam, “Why are you doing this? Beating me? Have I ever behaved like this before? Can’t you see that I cannot go?” Bilaam’s eyes are opened, he sees the angel and he gains clarity. When he finally reaches the encampment instead of cursing the Israelites, he blesses them in a beautiful poem.

There are so many lessons we should take into account from this story—that can make our lives a lot better–What can we learn from a talking donkey? And from the entire story?Sometimes a donkey can see what we human can’t. Why? Because we have pride, ego, ulterior motives, materialism.  Too much in our way for us to see the real truth!

And here is part of what he says.. which is remarkable! From his mouth comes out the following, “How good are your tents oh Jacob, your doweling places oh Israel.” What really fascinates me is that Rabbis have taken this phrase that was uttered by someone who wanted to curse us and we insert it in our opening daily blessings in our prayer book. To this day!