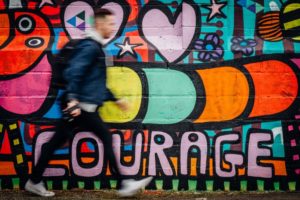 I was on the plane back to Portland from a speaking engagement at Princeton New Jersey philanthropy luncheon when I watched the movie Joy with Bradley Cooper, Robert De Niro and Jennifer Lawrence.

Against all odds, Joy, the main actress, became a success. A multi million business icon with a creative mind, entrepreneurial spirit and great imagination. In her youth she liked to design objects and structures, but with a dysfunctional mother, disillusioned and a put down father, and a jealous step sister, Joy settled into a life of mediocracy, letting go of her dreams and hopes.

Does that happen to you? You come up with a new idea, a bright and progressive project, a way of making additional income, and something along the way happens, as if puncturing a hole in your bucket full of ideas and energy? And.. you let go … you cannot execute what you plan to do. What happened?

I understand this feeling! A year ago I could not have imagine the journey I would be taking these days, flying to different places all across the United States (do I hear Europe, Israel and Canada are next?), inspiring people with positive messages and new outlook.

For thirty years, my entire adult life really, I had been working in Jewish education, teaching and mentoring teenagers, coaching parents, creating adult education courses, writing curriculum and lesson plans for every age group. And I did enjoy it. I felt I was of service and my services were appreciated. It was a good living. But my soul was not satisfied, something was missing. I was not living up to my potential, to my vision of me.

My awakening began when then my 38-year-old sister was diagnosed with stage 3 breast cancer. She lived in Israel and I am 10,000 miles away. What would I do? I began by creating positive videos and posting it on Facebook! I did it for an entire year!

I talked about loving yourself, believing in your power, getting along with other people, finding the joy in the everyday and living a life of purpose! I thought that would be the end of this project. My vision was narrow. And then, while still working in the synagogue, I began writing down all of what I said. I don’t know what pulled me to do it… almost an inner calling. And then, as if planned by an outside power, I met an acquaintance who was also an editor, so I asked her to help me when I had no money to pay but my word and my promise that I will. And she trusted me. And believed in me!

Four years later these videos became my book, Moments of the Heart, the four relationships everyone should have to live wholeheartedly!

What sparked it all? I believe it began with hope. I watched my sister hoping to have a healthy future, which gave me the strength to hope for her but also for me. You see, I discovered that hope is the seed for everything good in life. As hope is the antithesis to fear, there are no negative affects. Fear paralyzed us. It makes us unable to think creatively. It disables our minds because it wants to “protect” and keep safe what it knows for sure. Hoping is not for sure. No one tells us that what we are hopeful will become a reality! But we still hope! Think of times you have been hopeful—What motivated you to be hopeful?

As my sister was leaning toward hope, so did I. Doing that inevitably asked me to do the second necessary step- taking action. Because hopeful people do things. They don’t wait for it to happen! They initiate.

Hoping and acting upon it. I want you to pause for a second and reflect on your life. Your business. What are you hoping for? Think big and out of the box. What are you dreaming for your life? Now ask yourself “can I take one step today to turn this hope into reality? One small purposeful step followed by another intentional step will eventually get you to your destination.

And then comes the third crucial step in making your hope flourish from a dream to reality. It’s the missing ingredient. It is the magic sauce, without which hope, and action can’t manifest!

And that is courage! Courage to take the first step, sometimes against all odds.

What is courage, anyway? Courage is what we do when initially there is no logic leading us. It’s the knowing deep down in our souls that what we are about to do is the right step for us. The word courage originates in Latin from the word heart, and in French the word for heart is couer. In Hebrew the word for courage is Ometz lev, which literally means the adoption of the heart. Courage is the moving from hoping to action through adopting new behaviors, new actions. For Stepping outside of the box that you or others have placed before you. Courage is doing something not knowing if we will sink or soar. We listen persistently to our hearts. We courageously follow our intention with action. And we hope, knowing that failing only means trying again by taking different actions.

As the movie Joy continues, Joy realizes that she can trust her instincts! She deserves to hope and that no one can take from her the courage that she so desperately holds onto; actions that will lead her to the right outcome! She fights for her idea and her goal with the support of her best friend accompanied by the least expected loyalty of her ex-husband. With these two confidants she builds an empire on HSN. This is a story inspired by the true Joy Mangano who later became a QVC and an HSN sensation!

If she can do it— so can you! What holds you back? A little low on courage? Hope? Action?

Let’s fold up our sleeves and search for these three missing ingredients. Have the hope to dream, and the courage to take the actions needed! You can do it! I know it!