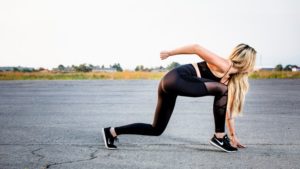 When I tell my kids that I was a runner in high school, they giggle. When I tell them that I actually competed while I was in the army and came fourth in the country in long-distance running with obstacles (sand, water in my army boots, the whole deal), they downright burst into laughter. Why is that? Don’t I look like a runner?

Well, I don’t have to look too far to realize that they actually never saw me running! What is in my head, I comfort myself, and will always stay in my head, is a beautiful memory of a reality long ago. Because let’s face it, if no one in my family can see it, maybe it never happened!

But when a different kind of opportunity presented itself to me recently, I totally ran. Ran toward it. Let me share — in a recent conference that I attended, I so happen to sit next to a person that was doing reflexology. How coincidental!  I was searching for such a person as I’m planning a women’s only boutique experience centering around Moments of The Heart, four relationships everyone should have to live wholeheartedly. I envision having somebody who will do yoga and meditation, someone who will do reflexology, and someone who will do henna tattoos. The only missing link was the reflexology. And here I was, sitting next to a person whose job it is. Coincidence? Or was it God’s work, and I just needed to “run” toward “it” (the opportunity)? Couple days after the conference I received a message from that person with a gift to experience reflexology.  This person ran towards me!

And I, in return, did not hesitate and booked the treatment.  I found my reflexologist!

What is “running”? I believe it is seeing the opportunity and not waiting and thinking about it too long, but rather moving forward. In other words, taking the chance! In the ethics of the fathers, known in Hebrew as,פרקי אבות Ben Azzai says “run to perform even a minor Mitzvah. Why running? I think the rabbis are revealing to us the human tendency of hesitation. That if we allow too much time for thinking, reflecting, measuring our next step, many of us will not take the chance to just do it. Think for yourself of all the times that you said it yourself “I will do that when I am done with (fill the blank)”. And the truth was that as a result you never did it. Can you think of an occasional such as this?

What I did, is running toward an opportunity. Because an opportunity is only there for a limited time, and our job is to take advantage of the amazing opportunities that we are presented with, every single day.

This past year I’ve had so many encounters with people that cracked small windows, and opened bigger doors. All I had to do, is run toward them.

I did physically run in the past even if I cannot prove it. Now I dance. But I still run toward those opportunities. Watch me!